Inuit art and culture has been an important focus of my curatorial work for many years. In the summer of 1998 I had the opportunity to visit the Inuit in their native land. I traveled to Baffin Island, which is in the Eastern Canadian Arctic, some 2,000 miles north of Montreal. I was able to meet these aboriginal people on their own turf, and to visit with some of their legendary artists/craftsmen and learn, firsthand, more about them and their art.

Baffin Island is a part of the new self-governing Territory of Nunavut, which came into existence April 1, 1999. The Inuit thus became stewards of the land on which they have lived for ten centuries.

Eleven thousand people live on Baffin Island, 85% of whom are Inuit, and they speak mainly Inuktitut; the rest of the population is a mix of Anglo, French-Canadians and Europeans who serve as teachers, ministers, government workers, nurses, and doctors.

Most settlements of Nunavut are a blend of modern and traditional life, with winding gravel roads, pre-fabricated houses, schools, a small inn or two, a nursing station, government offices and churches. Access to most towns is limited to air travel: daily flights, weather permitting, ensure the communities have most modern necessities. Fishing and hunting are still the main subsistence activities, but the arrival of the annual container ship is a major event in many settlements, for it brings the snowmobiles, VCR's and TV sets of the "white man."

We visited three communities while on Baffin Island:

Iqaluit, with a population of 4,000 is the largest town on the island and is the new capital and governmental center of Nunavut. The town was bustling with construction everywhere while we were there. Iqaluit's airport is the main transportation hub to and from southern Canada, and other Baffin Island communities.

Missionaries arrived on Baffin Island with the whaling ships of the 19th century, and over the years, Christianity gradually replaced Shamanism and the traditional Inuit animistic religion. Eventually, some of the Inuit became ministers of the Church, and made the Church their own.

St. Jude's Anglican Cathedral, an architectural gem, is an example of this. It is shaped like an igloo with a spire on top, and was designed and built by members of the congregation. Inside are wall hangings depicting Inuit traditional life and church activities. They were designed and appliquéd by women from several different communities. The communion rails and pulpit were built by the men are in the shape of sleds. Narwhal tusks form a cross behind the altar and woven baskets serve as collection plates. There are sealskin kneeling pads and a soapstone font dedicated by Queen Elizabeth.

Pangnirtung, famous for its weaving and printmaking, is a hamlet of only 1200 people. The hamlet boasts the Uqqurmiut Center of Weaving and Printmaking where we met some of the talented, dedicated artists. More than 150 tapestry designs and numerous highly prized print images have been developed over the years. They're collected by museums and private individuals around the world. The studios are very important to the community, as a way of preserving their culture through their art - but also as an income producing activity. 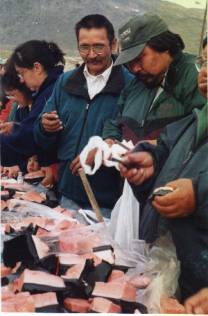 Pangnirtung, originally, was a whaling community. While we were there, there was great excitement in the hamlet: for the first time in over fifty years the community had been given permission to harvest a Bowhead whale! Twenty four men, of all ages were selected to go on the hunt. The youngest male invited was a teenager, selected for his youth and ability to preserve the experience of the hunt for future generations.

It took three days to cut up the huge 42' x 24' whale. Everyone, young and old, feasted on whale blubber while celebratory speeches, singing and prayers went on all the while. Later in the community building, everyone danced the Scottish reel to accordion music, a legacy from their European ancestors.

The last place we visited was Cape Dorset where the inhabitants number approximately 1100, 92% of whom are Inuit. They are direct descendants of the Thule people who lived in the area about 1000 AD. They were the people encountered by the first explorers in the region in the 16th century.

In Cape Dorset, which is known as the capital of the Inuit Art world, we met with some of its most famous Inuit artists, especially Kenojuak Ashevak, who is over 70 years old and Mary (Miaji) Pudlat, 75. Both have been printmakers since this art developed in the North in the late 1950s. 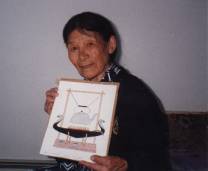 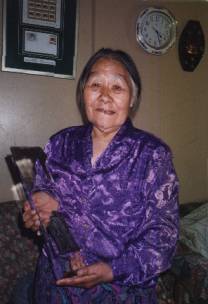 We visited the West Baffin Eskimo Cooperative building where the renowned Cape Dorset prints and sculptures are made. The cooperative has been an important factor in the economy of the community and distributes its art worldwide.

Across a small body of water from Cape Dorset is Mallik Island, the ancient Thule site. Here are remains of in-ground stone houses and fox traps and an Inukshuk, a stone sculpture in the shape of a man, built to mark a site or scare caribou into the hunters path. The Inukshuk is featured on Nunavut's new flag.

When visiting Baffin Island, one can still sense its ancient traditions and see the effects of the coming of the whalers, traders, missionaries, and the influence of the Canadian Government. One can see in Inuit art images of the past and the people's transition from traditional to contemporary life.

Seeing the forbidding landscape and seascapes in which the Inuit have survived for centuries, visiting the ancient sites where they lived as stone age people, then seeing the modern villages with their celebration, meeting the artists and people of the towns were all part of an extraordinary experience I will treasure forever.

This article was submitted by Roslyn Tunis, an ISA member and an Independent Curator and Museum Consultant in Oakland, California. She was the Curator of Art when the Otsiningo Pow Wow was headquartered at Roberson Center in Binghamton.